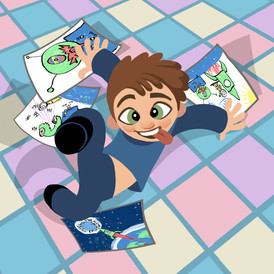 Nick telling his story to the class in "My Trip To Funny Land".

With the economy in a not-so-good state, finding companies that want to put money into development is difficult. Jobs are being cut back and there are more artists out there than work. Why hire long distance freelance when you can hire someone in-house? My answer to that is; I work for less money with no overhead fees since I am not using your facilities. Still, I am hoping for brighter days in this country's economy ... as we all are.﻿ 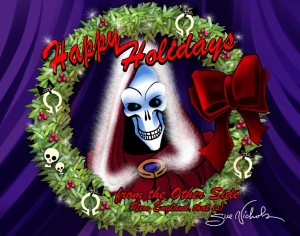 A personal holiday card I sent during the development of this nameless idea.

I worked with Disney Feature Animation Directors, Ron Clements and John Musker again. I adore working with people with whom I already have a relationship. Knowing what your bosses want and they knowing what you can deliver makes the work far easier to achieve. I've worked with Ron and John since the 1980s, so it feels like we are in the same building even if on opposite sides of the country when we are discussing ideas. Now, I don't think I can say what I was working on since the project was shelved. But those of you who know my love of Halloween and the morbid would know how much I LOVED working on this idea. I really hope they eventually obtain the rights to do this. 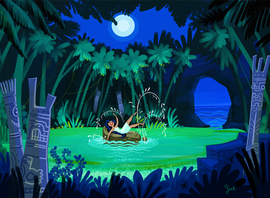 I was called back again by Ron Clements and Jon Musker to design some development ideas for the next story to replace the last one I can not talk about. Since this is another film they tried to develope but has been changed to something different, I once again can not say anything about it. Don't ya just hate that! But hey, you never want to burn bridges by breaking contractual promises. Trust goes a long way - especially if you want to freelance out of the building!!! And yes, this is a small world and everything you do does get around. Play nice and honest if you want a lasting career in animation.

2016 - Now that Disney has finally announced that Ron and John are creating "Moana" I am free to say what I have been working on. Unfortunately, it was not "Moana". It was the 2 other Hawiian story ideas they tried before settling on their final idea. Many ideas are tried and changed before finding that one that works. 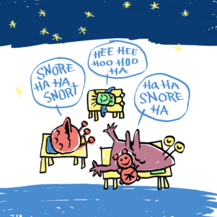 I based my sketches on Nick's art.

I illustrated my nephew's first grade story into a children's book which shows kids that standing in front of a class to deliver a talk is not scary. "My Trip To Funny Land" shows Nick reading his story to fellow students and receiving great applause for his wonderful efforts. We are interested in creating a line of books using stories written by children with learning disabilities in hopes to inspire them and others like them to enjoy school. 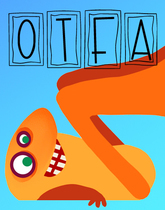 "Occupational Therapy For Artists", an e-book of exercises and ergonomics to help artists keep healthy while they draw is now available on Amazon! My husband works in occupational therapy and has helped me to create a book to focus on stretches geared specifically for the way artists work. We promoted the e-book at a workshop during the CTN Expo in Burbank November 21-23.

Worked again for a couple of weeks on yet another new version of Ron and John's latest. But freelance is slow, so I took a day job answering phones. Can't be too snobby if you want to be an artist. Take the work when you can.

In October of 2014, I was diagnosed with an aggressive Infiltrating Ductal Carcinoma, grade 3. AKA: Breast Cancer. So 2015-17 was devoted to treating this cancer. I did get out after a while and do crafting for St. Michael's events.

While recuperating these past few years, I have been working on my eBay site, CSM Collectables where I sell 'vintage' stuff (mainly sterling jewelry). I've also started back up donating my craft to designing sets for the St. Michael's Players and VBC. As for animation work....

I am back to STORY BOARDING! It's been a challenge jumpstarting my chemo brain around continuity sketching, but I love it! Fantastic therapy! I started one freelance story job in 2017. My second independent film project lasted for a month and a half this summer. Much easier to do now that technology has been created to support long distance meetings. As I look for more story work to come through, I am trying to get back to traditional art as I joined a local group the Scantic River Artisans. I had my first gallery show! 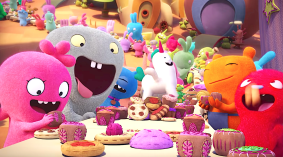 One of the storyboard projects I worked on in 2018 was released this year; "Ugly Dolls". It was a super fun project and great to work with Kelly Asbery again.

On more somber news, my cancer came back with a vengeance. I lost my ability to walk for a couple of months and have been doing some intensive therapy to learn how to move again. See my MBS Diary to learn more.

Sue has joined the Scantic River Artisans. Come see art made by local artists of various mediums. Find out more about SRC at this link.

Sue is now a Certified Gemologist by the International Gem Society! Sue became a gemologist to help better identify gems in jewelry bought and sold by the company she and her husband run, CSM Collectables. Find it on Ebay.

My husband and I are looking for a new career to pay for the kids in college. Check it out.

All photos and art displayed on this site are protected under copyright law.